Last Autumn, as part of my Kickstarter to raise money to produce the book and album for the Busk England project, I offered to write essays on the subject of the backer’s choice. Here is the first of them, commissioned by JoAnne Hughes, and she tells me that the title was inspired by the work of The World Bee Project. I hope you enjoy it.

The book and the album have now been completed, titled ‘Seasons of Change’, and you can get them here.

The phrase, perhaps, comes from an ‘Audio Visual Installation’ by the splendidly named ‘Wolfgang Buttruss’ called ‘The Hive’, where 170,000 connected pieces of aluminium contain a soundscape of cello, human vocal, and bees buzzing, as they apparently have been scientifically proven to when happy, in the key of ‘C’.

This though, is in Kew gardens, in London, and has probably been reviewed by people who presumably know what they’re talking about when it comes to art. As for scientifically proven? Well skin cream is scientifically proven to fight the six signs of aging, and yet we grow wrinkly and sag in surprising places. In my case, sign number five is that I much more frequently inadvertently trigger the hand dryer with my arse in motorway service station toilets. Explain that, science.

And what defines a happy bee anyway? Contentedness and euphoria could both be described as happiness, and yet they are almost opposite, quite irreconcilable. I would not want to be in a room with euphoric bees, no matter what key they were in.

I went down into my garden to see if there were any bees passing through. Spring was bursting out, unrestrained, erotic, from every bud, and the sun warmed the insects of the air and the tadpoles of the pond, working away to a froth in the shallow edges. Life is defined in this new season purely by its shameless vitality. By the apple tree I stood, for a remarkable hour. Fiddle in my hand, matching the note of the passing insects. ‘A’. ‘G’. ‘B flat’. In the dry soil by the vegetable bed, a solitary bee was making a nest for itself. ‘A’ again. It paused, and looked over its shoulder, a little aggrieved at my collaboration without consent. “Really?” Neighbours peeked over the hedge. This was not normal behaviour on the Merseybank council estate, where my neighbours change every year or so, another family locked into a spiral of issues made to use next door as a staging post onto who knows where.

‘A’ suddenly broke into A flat as a wasp took a hoverfly down to dismember, hitting the soil with the tiniest thud I’d have missed if I wasn’t tuned in and infused with the expressions of life and death around me. Above and below were beginnings and brutal endings, and although I’m not the first writer to see it, the sudden awareness that I was surrounded by a visceral, endless fight for survival was astonishing. It’s just too small usually, we are too preoccupied, and entire generational wars can be ended by an unknowing boot striding down to the compost. 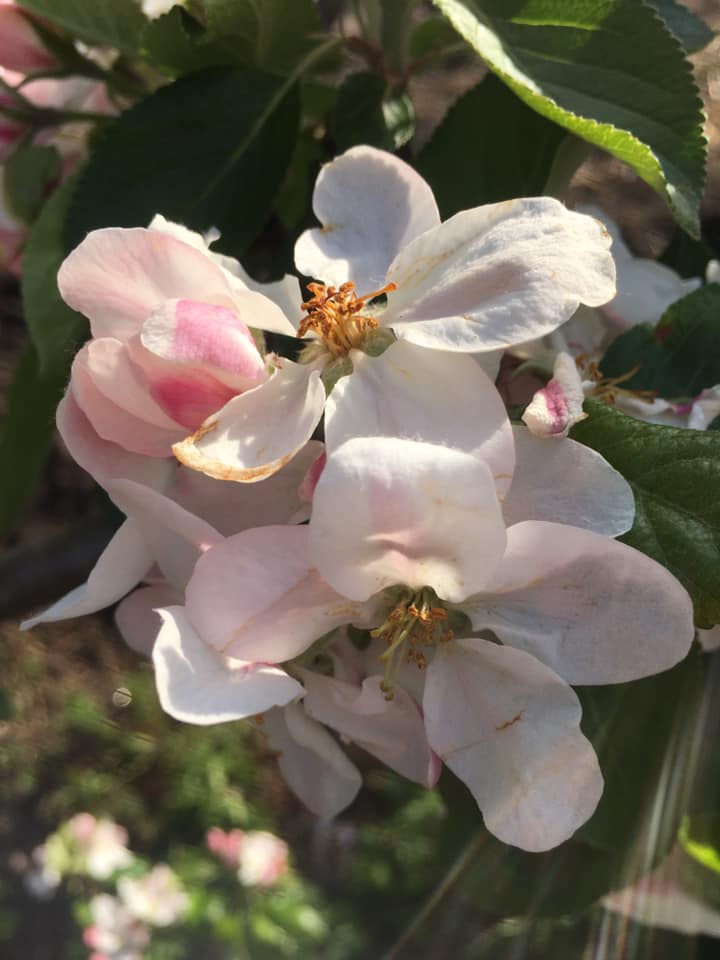 I allowed myself to meditate further among the outwellings of spring. A big bumble bee climbed into a rosemary blossom several sizes too small, and the entire flower dropped off with bee inside down onto the floor with a scarcely audible ‘floomph’. After a moment, where I swear the bee looked both up and down in accusation, it carried on, and I followed it around from blossom to blossom, like the world’s most ludicrously obvious spy tailing his target.

The bee seemed unconcerned by the giant lumberer, safely armed with its sting, like an advocate of the Second Amendment whose weapon is believed to keep them from trouble. But then, a bee is a little less likely to spend time on internet forums, absorbing deep-hive conspiracies and anti-hoverfly paranoia, before heading out on a senseless stinging spree. Mindless violence is the realm of wasps in the Autumn, drunk on windfalls and convinced that you’re looking at their bird. I wrote a tune for them once, the bastards.

Spring has none of this, just a vibrant urgency. An opportunity to be grasped as the world comes back to life and food returns as the plant kingdom descends into sexual frenzy, each delicate bloom a blunt proposition, a gartered leg stretched out by the main road at 1am.

I have friends who keep bees. I’d asked one about their hives;

“How do you know they’re happy?”

He’d thought for a minute, and replied;

“I know when they’re angry.”

I’d planned to go round, stand by the hives and play them music by the Smiths, see if the note changed. “I was looking for a hive and then I found a hive…” Would they attack me, or just sink into gloom and descend through the keys?

But then, music and mood have strange interplay. Perhaps the most depressing band I have ever heard are ‘My Dying Bride’, legends of the doom metal scene, a genre that had no choice but to emerge in Bradford around 1990. Their all-consuming misery does not have the effect you would expect on their audience. One walks out of a concert uplifted, cleansed, and quite ready to take on the next day with a new optimism. Even when absorbed in their music, I encounter an extraordinary happiness, floating in the sound-world,  it is a euphoria, (Incidentally, euphoria was a name my friend wanted to give his folk trio, but nobody got it) and in deepest misery we find happiness. No true and richly savoured mood is possible without a profound understanding of the counterpoint. (Album recommendation ‘A Line of Deathless Kings’ by the way) Sad songs and minor keys are as sure a way to meaningful happiness as a jolly tune can be, as Nigel Tufnel puts it so succinctly in ‘This Is Spinal Tap’

“It’s part of a trilogy, a musical trilogy I’m working on in D minor which is the saddest of all keys, I find. People weep instantly when they hear it, and I don’t know why.”
“What do you call this?”
“Well, this piece is called “Lick My Love Pump””

But such a mood is more than a single, contained feeling, at such a concert. It is about the shared experience. It’s no good asking one bee what key they feel like buzzing in today. The hypothesis concerns bees, plural.

Why do bees buzz? The main reason for a buzz is wingbeat, and quite simply, the larger the bee, the lower the tone, as a larger wing flaps more slowly. A hive of bees then, where they are all broadly of the same stock, can achieve a collective tone, if they’re all feeling of a mood. You hear of the hive itself changing key, a warning before the launch. A last chance to get away.

So, like the mood of a concert hall, the bees are as one in their opinion. A great performer picks up an audience and plays their mood collectively, a web of social cues compelling the room to behave as one, a school of fish darting to the performer’s waved hand. In my case it can be just as easily demonstrated with the example of when I lost an entire room of paying audience members with a single ill-timed knob-joke. It is the same phenomenon in reverse, and it cannot be undone, for they are many and you are one and your power is gone.

I could not answer this question here, in this garden, where a single, easily suggestible bee might pop by every few minutes. I needed to hear the packed hall in concert, the song of thousands whose mood was a cumulative effort.

I rang my other bee-keeping friend. It was a well-timed call, for in another world I’d have been playing at her folk club that evening. She naturally assumed this was the purpose of my call.

“I want to know what key they buzz in, depending on their mood.”

“Well ok.” She seemed unsurprised with my request. I am a known nutter, after all. “They’re pretty happy right now, the sun is out, its warm, and there’s plenty of flowers.”

She agreed to send me audio files of her hive inspections. Each of her four hives had survived the winter, and one was looking flighty. The files rolled in. I sat with my mandolin and jangled along. Mostly ‘B’. I passed over my findings. The next day, she sent me more files. She’d disturbed a queen, and the bees were cross. Suddenly they’d raised the tone to C.

It’s not looking good for the theory here. Perhaps there are regional variations? Do Southern bees buzz higher, owing to their middle-class upbringing? Yorkshire bees might be as low as the ‘G’ in ‘Grit’. It’s true with songbirds and cows, regional accents abound in the animal kingdom it turns out, so why not with bees? There’s a PhD in there for someone.

But there’s a second reason that a bee might buzz, and that’s when deep in a flower, surrounded by the ecstasy of golden dust, it will hit a new note and agitate for more. And here, it’s middle C that works, a note to draw more and more from the flower.

Our honey, and far more importantly, the pollination of our crops depends upon this central note, the heart of our Western system of music, and all its inherent tuning problems. Coincidence? Maybe, I’m not going to promulgate a romantic but probably deeply flawed theory about C being the fundamental note of all nature, but it’s a nice coincidence if nothing else and the Anglo concertina sounds loveliest in ‘C’.

But does it make them happy? The happiest bees I’ve heard are those at rest, back in the hive after a long day’s work, surrounded by their colleagues, and these hum in a steady ‘B’. ‘C’ is for a state of raised awareness, be that excitement or warning, a higher state of agitation. ‘C’ is ready to ride the zipwire. ‘B’ is the hygge, the evening in front of the fire with a bottle of wine and a good film.

And I understand it. Crowds can be fearful and troubling. Crowd mentality is one of the strange features of human life. Fear and worry transmitting through a crowd can be terrifying. But to be lost in a room of laughter and joy is as uplifting as it gets, and to share with 5000 others the winning try that puts your side in the final is to be part of a collective emotional experience that stays with you for life, an ‘I was there’ moment, and perhaps for me takes a little of the emotional place of religion. It’s not that I ‘believe’, it’s that I love the joy of the hive’s success and I’ll also drink my glass of a collective failure. We all buzz together, when we buzz. Unlike bees, the collective voice of the Salford faithful rarely finds a single tuneful note. Maybe that’s why we so rarely win.

“What’s the C for, you say? Sailing ships in, I reply, but that’s only jokes, only the laffles. It’s Colin.”

Travel writer, musician. Wrote 'Seasons of Change - Busking England'. Now living on the waterways of London on a 1937 wooden oil tanker. View all posts by tomkitch1